Ahoy there, mateys! It’s International Talk Like A Pirate Day, so obviously we had to put our tricorne’s on (ahem, pirate hats, to you and I) and come up with the best treasures out there if you want to channel your inner swashbuckler.  Is a pirate’s life for you? Arrrr you ready? Say Aye to follow the compass to the best pirate vacation deals out there! (Ok, we’ll try and stop now, but no promises. #sorrynotsorry)

You wouldn’t necessarily know it to look at the now sleepy fishing town, but Port Royal - a village in southeastern Jamaica located at the end of the Palisadoes - was once known as the “wickedest city on earth”. The remains of Fort Charles - dating back to the 17th century - is today a museum containing archaeology artifacts salvaged from the “sunken” pirate city.

The infamous Captain Henry Morgan (the dude from the rum) is also buried in the Palisadoes Cemetery, if you wanted to go and, er, pay your respects.

A prime spot for pirates back in the 17th century was Nassau - not only because who doesn’t love the idea of drinking rum under the Caribbean sun from the comfort of a hammock? - but also thanks to the waters, which proved too shallow for giant warships to enter but were perfect for the vessels preferred by the swashbucklers. Blackbeard set up home here, so it’s par for the course that an entire pirate history is on display everywhere - from the well-preserved forts to a museum.

Another Caribbean hotspot - with a difference. Yup, this one’s home to the fictional Cannibal Island from Pirates of the Caribbean - impressively authentic thanks to the many pirates who once lived here and - if legend is to be believed - over a million pesos in buried treasure! But - don’t despair; even if you’re not lucky enough to find the actual loot, modern-day Dominica is filled with natural gems, such as breathtaking beaches, lush jungles and sparkling waterfalls. (And if you are lucky enough to find the loot? Please ask us for our bank details so we can enjoy our well-deserved commission!)

On top of all this, an epic Pirate Cruise awaits you here, too, inviting you to walk the plank and snorkel among a natural reef filled with tropical fish before heading to Shark Island, where X marks the safe spot for swimming with sharks and stingrays. Before re-boarding the ship, you’ll enjoy a full-scale pirate battle on the beach, complete with clashing blades and explosive effects.

An infamous siege once took place on this French island, led by Captain Kidd, who wreaked havoc on the high seas. Today, St. Kitts is popular with amateur treasure hunters, thanks to the many legends, and you can try your luck while snorkeling as part of this all-inclusive, catamaran cruise - complete with a scenic smorgasbord of sun, sea and gentle Caribbean breeze.

Sail the Caribbean Sea on board the Jolly Roger - an authentic wooden ship manned by an unruly but friendly crew of cutthroat pirates. The 3.5-hour cruise includes a delicious dinner of gourmet grub, an epic pirate battle - complete with swashbuckling sword fighting, awesome acrobatics, live music, dancing and plenty of alcohol (#openbar) - and a treasure hunt and face painting for the kids! Soak up the rum, soak up the spectacular views of the Caribbean coast and enjoy the voyage!

Get your tickets here

It might come as something of a surprise that the laid-back island of Malta was once a hub of pirate activity. However, thanks to its prime spot in the Mediterranean Sea, coupled with the nooks and crannies of its coastline, it boasted all the right ingredients for a swashbuckling hotspot back in the 18th century. The island of Gozo, in particular, is a great place to visit if you’re interested in seeing where cannons were once fired to alert the citizens of impending intruders.

With its stunning rockery, crystal-clear waters and white, sandy beaches, Cornwall is today one of the most sought-out hotspots to vacation in the UK. Is it any wonder that some of the most famous pirates of yesteryear - including Blackbeard - loved it too, albeit for different reasons? Yup, thanks to the jagged inlets and coves that could easily hide ships, it proved a popular hideout, and you can visit the old tunnels by day and drink yer rum in the Admiral Benbow - a pirate-themed pub - by night!

When it came to hidden treasure, pirates sure liked to ‘move it, move it’ back in the day on the island of Madagascar (IYKYK), thanks to the miles of secluded coves, perpetually-warm climate and abundance of food and fresh water. Today, you can still spot the wreckages of some ships - both from the comfort of a boat or while snorkeling!

Book a 13-day adventure of this paradise island today

Havana was a popular trading port in the 1500s  filled with Spanish goods, making it an easy target for pirates, who would frequent local taverns to pick up intel about arriving ships before catching them by surprise and plundering their booty.

Remnants of this pirate past are, therefore, everywhere, and - as well as checking out the dedicated museum - you can enjoy a taste of the pirate life by seeing how Cuban cigars are made and drinking their unbeatable rum.

Is there anything Florida can’t offer when it comes to vacations?  There’s so much to choose from we’re not quite sure where to start, so we guess we’ll go with the most obvious: The Pirates of the Caribbean ride at Disney World, Orlando (the inspiration behind the movie franchise, didn’t you know?).

Of course, Florida also lays claim to actual pirate history on its shores, which you can learn all about at the Pirate and Treasure Museum in St. Augustine, featuring one of the world’s most extensive collection of pirate relics such as Blackbeard’s pistol, golden treasure and the skull from an authentic Jolly Roger flag. Somewhat fittingly, the museum is in a city that was destroyed by pirates not once but twice!

If you’re here in January, you must also check out the Gasparilla festival in nearby Tampa - named after legendary pirate Jose Gaspar who terrorized the coast of West Florida during the late 18th and early 19th centuries. Between the floats, marching bands, flowing alcohol and the mayor’s “surrendering” of the key to the city, it can get somewhat boisterous, so if you have mini travel pirates among you, you might want to check out the Children’s Gasparilla instead, filled with spectacular fireworks, food vendors and bands.

Lake Charles - a southwest city in Louisiana - holds a two-week pirate festival every May called Contraband Days and - among other things - includes forcing the fully-clothed mayor to walk the plank to the sound of roaring canons! After Mardi Gras, it’s the state’s longest-running festival and features contests for kids’ pirate costumes, barbecuing, boat building, carnival rides and food booths selling delicious Cajun specialties.

One for the movie buffs, head to the knife-edged cliffs and emerald-green valleys of Kauai if you want to walk in the footsteps of Captain Jack Sparrow, as this is where some of the scenes were filmed for the movie. (As if you really need a reason to vacation in Hawaii!) 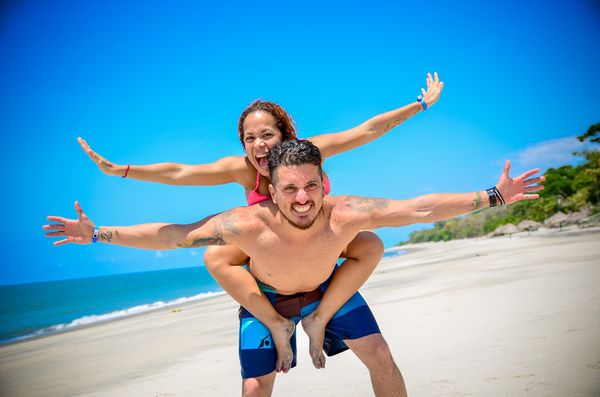