(Or The Seven Wonders Of The World, Part 7)

This is it - we’ve finally made it to the end of our series! And - true to form - we’re going out with a bang. So, buckle up and journey back with us to discover why you should visit one of the oldest ancient civilizations in the world:

Ok, we kinda spoiled this one already, but the proof is in the pyramids (or The Great Pyramids, to you and I) - the last surviving ancient wonder - along with ancient tombs and temples.

The six-million-ton Great Pyramid of Giza - guarded by the all-encompassing Sphinx - was built almost 5,000 years ago as royal tombs for three different pharaohs. From a distance, it remains one of the most recognizable landmarks known to man, but up close, you can also see original art and hieroglyphics depicting scenes of farmers working the field, religious traditions and burial practices. It’s all really quite mind-boggling, to tell you the truth! Don’t miss the Pyramids Sound and Light Show - exactly what it says on the tin. Book a guided tour here

Of course, this is not the only mark of ancient history in the country. Saqqara is another sprawling cemetery of pyramids and tombs - including the oldest remaining pyramid, the Old Kingdom Step Pyramid, which demonstrates how the ancient architects learned to finally create a true pyramid shape (as well as providing some of the best views of the Nile!). As the largest archeological site in Egypt, it is certainly not one to be missed. For somewhere less crowded, head to Dahshur - a little, lesser-known village south of Cairo that also boasts a selection of pyramids.

A quick note about the temples, too - serious masterpieces that truly embody a culture of splashing the cash! From Karnak - the largest temple ever built (over 1500 years!) to the Temples of Philae; the Valley of the Kings to Abu Simbel (the great temple of Ramses II!), and, of course, the UNESCO World Heritage town of Luxor, which has been coined the biggest open-air museum in the world (and includes the final resting place of Tutankhamun!) everywhere you go in Egypt is intended to fascinate. Book an overnight sleeper train from Cairo to Luxor

2. There are world-famous museums, too

You might think that in a country steeped in so much history, museums would be surplus to requirements, but you’d be wrong. Indeed, a brand new establishment - The Grand Egyptian Museum - is estimated to open in November 2022, where it will hold the title of the biggest archeological museum in the world! Other iconic points of interest include the Cairo Museum - with its treasure trove of Pharaonic goodies - and the National Museum of Egyptian Civilization.

History aside, Egypt boasts an array of villages and towns quite unlike anywhere else. Here are some highlights:

4. It holds significance for the three monotheistic religions

There aren’t all that many places in the world that fulfill this statement, but then, not every place gives you the chance to climb the top of Mount Sinai, where Moses is believed to have received the Ten Commandments, follow in the footsteps of Jesus, the Virgin Mary and Joseph and visit centuries-old mosques.

Cairo - Egypt’s capital - is the perfect example of this, home to ancient churches, mosques and the Ben Ezra Synagogue. The Coptic Museum - holding the largest collection of Coptic Christian art and antiquities in the world - is also here. And, once you’ve got your religious fill, you can while away the day navigating the maze-like markets laden with ceramics, textiles, perfumes and spices.

5. It’s home to the River Nile

Unless the idea of visiting the longest river in the world doesn’t, er, float your boat, this is probably reason enough to bung Egypt to the top of your bucket list. Not only can you tick off a number of attractions while floating down it, such as Luxor and Aswan, but you’ll do so in style atop a traditional wooden sailing boat. Book a five-day cruise here

6. The desert is incredible

Well, it’d be rude not to focus on something that makes up around 90% of the country, wouldn’t it? The fact that we’ve got this far without much reference to it is a testament to the richness of the country, but don’t let that fool you into thinking the desert offers nothing of substance. On the contrary; you can book a safari, ride a camel, go horseback riding, quad bike, soak in natural springs and camp under the stars. You better believe this pristine wilderness offers something for everyone.

7. And so are the beaches

Picture this: soft, white sands and crystal-clear water, offering an abundance of water sports (we told you we’d come back to this!). Home to both the Mediterranean and the Red Sea, Egypt’s beaches can definitely compete with the world’s best, offering swathes of sand for every traveler.

Dive deep into a paradise beneath the waves and explore the brightly colored coral reef - home to fish, turtles, dolphins and sharks, or windsurf along the safe, steady waters. You’ll soon discover that underwater Egypt has as much to rival the temples and tombs on land. Don’t believe us? Check out Scuba Travel’s World’s Top 100 Dive Sites in 2022!

Even without the breathtaking views and beautiful beaches, Egypt offers something not many other countries can claim: Therapeutic tourism.

Between the 1,300+ natural springs, believed to help cure certain diseases and skin problems and sand-burying massages, said to treat physical injuries, Egypt is a natural spa destination. A special mention must go to the gorgeous Siwa Oasis - the tranquil tonic to the hustle and bustle of the cities. Surrounded by date palm plantations, it is one of the most picturesque spots in the country.

If you’re someone who enjoys fine cuisine, you won’t be disappointed by the Middle Eastern influence here. Food in Egypt is the lynchpin of both happiness and grief, and, as such, you can be sure they take it seriously! Expect a range of dishes - each bursting with flavor - courtesy of the fruit, vegetables and excess spice used.

10. The weather is always great

There is no bad time to book a vacation to Egypt, period. Even in the midst of winter, the sky is always blue and the sun is shining. Just what the doctor ordered!

So, there you have it: A place filled with diversity, there truly is something for everyone in eclectic Egypt. 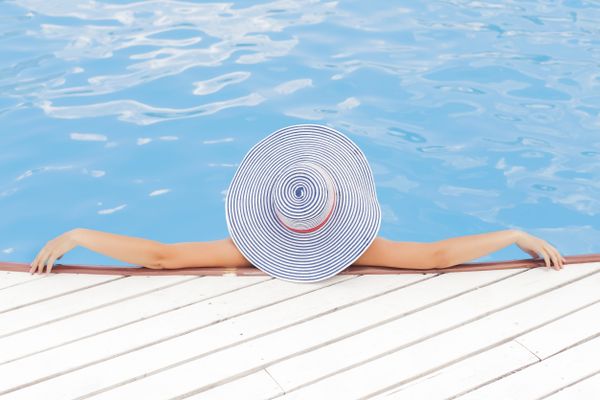